You are here: Home / Education / Air Force cadets get a look at Iowa Guard operations in Sioux City, Des Moines 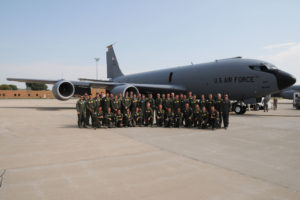 Forty cadets from the United States Air Force Academy in Colorado Springs flew to Sioux City and then Des Moines this past weekend aboard an Iowa Air National Guard KC-135 Stratotanker.

The cadets toured the Air Guard Facilities as part of a partner program between the Air Force Academy and the Iowa Guard. The cadets, including Cadet Second Class Jenna Petty from Spirit Lake, crawled into the boom operators pod in the back of the KC-135 to see a midair refueling of several F-16 fighters.

She says she had been on a KC-135 on the ground but had never flown on one. “That was an awesome 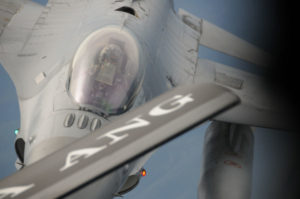 experience,” she says. While visiting the 132nd Wing in Des Moines the Cadets were shown the remotely piloted aircraft operations They also had dinner with Major General Tim Orr, the Adjutant General for the state of Iowa. Orr’s son attends the academy and the general says he invited the academy cadets here to give them a first-hand look at the National Guard operations.

“I really think this is the right thing to do, and having a son at the academy I inquired about when do you get your reserve component experience,” Orr says. “And I don’t believe in their curriculum without a program like this that they get a chance to see what our reserve components do for our Air Force.”

It’s the first time the Air Force Academy has partnered with the Air National Guard in this way. Most of the members of the group are second class cadets or equivalent to juniors in college. The Academy says the visit to Iowa allows the cadets to see a variety of Air Force specialties before deciding on a job at the beginning of their senior year.