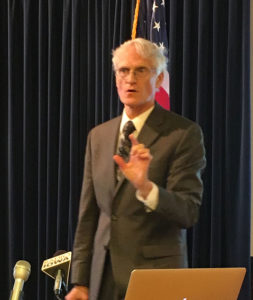 The governor’s budget chief told reporters this morning that $70.6 million in past-due payments were made to the state after June 30, dramatically reducing the deficit. If the deficit had been larger than $50 million, the governor would have been forced to call legislators back to Des Moines in a special session this fall to withdraw more. Iowa governors have the authority to withdraw up to $50 million from the economic emergency fund to cover a deficit.

Iowa Department of Management director Dave Roederer spent more than an hour briefing reporters on the accounting methods used to come up with the final number.

“This is the exact same thing that was done for 30 years, the system that we are using, the same progress,” Roederer said. “This is also audited every year by the auditor.”

One unexpected windfall came when some businesses paid the state more than $41 million dollars in income taxes in July — the withholding taxes from paychecks issued on Friday, June 30. Roederer told reporters this happens once every five or six years in the month of June when workers who are paid every two weeks have three rather than just two Friday paydays.

“Does everybody get this part?” Roederer asked. “Because this is kind of the key area that’s driving this.”

“It’s accounting gimmicks that were used,” Corbett said. “There may not be anything illegal about it, but in this case it just pushes the problem under the rug.”

The problem, according to Corbett, is that the state is spending too much. State Senator Nate Boulton of Des Moines is one of the Democrats running for governor and he said the state spending too much on tax credits for big businesses. Boulton, though, told reporters it’s too early to question the accounting methods used to close the books on the last state fiscal year.

“This is a very surprising, just sudden increase in funds that were found in the couch cushions,” said Boulton, who spoke with reporters in the Iowa Senate chambers after Roederer’s briefing concluded. “But at this point, we’re going to have to wait and see where all of that came from as we look through the numbers.”

This is the third time in 2017 that state officials have used the state’s cash reserves to cover expenses for the budgeting year that ended June 30th.