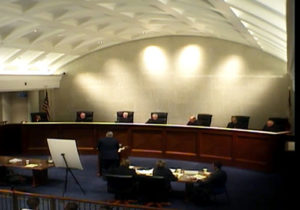 Marla Leaf challenged her ticket, saying the city didn’t prove she was speeding. Attorney James Larew of Iowa City represents Leaf and another group of people who had their cases combined. Larew says one of the problems is Cedar Rapids’ Automated Traffic Enforcement ordinance lacks the proper procedure for challenging the tickets.

“That fact that a person challenges a speed camera does not mean that a person is in favor or speeding The two are not the same,” Larew says. “The question is — if you have a speeding ATE ordinance — what method is there to challenge what may be errant decisions made by the state. Beneath that question is, who has the lawful authority to decide where to put these?”

He says the ordinance does not make it clear you can appeal the ticket to district court. Larew also questioned the legality of the ticket based on the DOT rules for camera placement. “Our interpretation of what the DOT did and with the city, was that the evidence gathered to prosecute all of these people was solely with the use of technologies that the DOT said were unlawfully placed,” Larew says.

He says they want two things. “One, a refund of payments made. Two, if they haven’t made a payment, injunctive relief that the city won’t go after them in terms of collections. Those are the remedies that we seek,” according to Larew.

Larew also argued that the ordinance is selective because it lets some drivers go without violations, and they only takes pictures of the rear license plates — which leaves out most trucks. “No semi trucks that go through this passage of highway, and thousands of government, none of them have license plates that show up on the database as a matter of choice,” Larew says. “Whereas if they took front pictures of all of those vehicles everyone would be a part of the database. We feel that is a violation of equal protection.”

Assistant City Attorney Patricia Kropf presented the Cedar Rapids side of the case. “The city’s got at least two very important interests here. Not only protecting our public, but protecting our officers and our first responders,” Kropf says. She says the section of the Interstate 380 where the cameras are located is on an S-Curve and that makes it dangerous to have officers pull over speeders.

The justices questioned Kropf about why they let trucks and government cars go without tickets. “They’re just not in the database that we use and need to use in order to do this in a cost-effective manner,” Kropf says. And Cedar Rapids Assistant City Attorney, Elizabeth Jacobi, also spoke. Jacobi was asked by the justices if not giving tickets to trucks could make it appear the city was trying to appease the trucking industry which is very important economically for the city.

Jacobi says there are several factors involved and show favoritism to the trucking industry is not one of them. “To enforce the speed limit in a cost-effective manner within the city limits. And to do so in an objective, non-invasive way,” Jacobi explains. “Front plates were ruled out for multiple reasons — one of which is that they might be more invasive.” She says motorists do not want the front plate pictures which could show their faces and the faces of passengers in their cars. Jacobi says the way the tickets are issued shows they are focusing on safety.

“No individuals are even brought into this program unless there is an excessive speed,” Jacobi says. “And that also goes to the more tailored mode in which this program has been implemented…there is a 12 miles-an-hour threshold so that it is more narrowly tailored to a more dangerous vehicle.” The speed cameras in Cedar Rapids have been shut off while another case in Polk County challenges the DOT’s authority to regulate the cameras. The high court will issue its ruling at a later date.