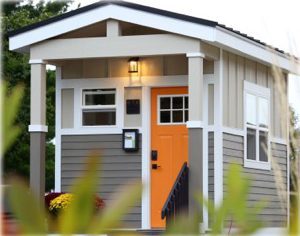 Staff and students at Drake University and the University of Northern Iowa have built several so-called “tiny houses” that will eventually help homeless people in Des Moines.

Three of the 148-square-foot structures constructed on the UNI campus in Cedar Falls were shipped out this week.

UNI Technology Department professor Scott Greenhalgh says the homes are on display this weekend at the Jasper County Fairgrounds — the site of an event called Tiny Fest Midwest. “There should be about two dozen houses there in Colfax,” Greenhalgh said. “The end goal is to donate them to a nonprofit organization out of Des Moines that works on homeless advocacy and housing.”

Drake University is also donating three tiny houses to the organization known as Joppa. Construction on another tiny house is already underway UNI. According to Greenhalgh, it will be used by a group in Wisconsin that works with developmentally challenged individuals.

UNI senior Baily Abbott jumped at the chance to get hands-on experience helping build the houses. Abbott said, “I know that as a technology and engineering education major, I’m going to have to teach construction one day, so when my professor told me we want to build a tiny house, I said ‘sign me up.'”