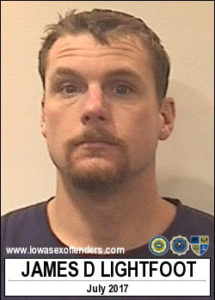 U.S. Marshals are asking for the public’s help in finding a 31-year-old man who walked away from a residential treatment facility in Sioux City.

James Lightfoot of Sioux City was sent to the facility after he failed to register as a sex offender. He has blond hair and blue eyes and the Iowa Department of Correction’s website indicates he sometimes goes by the name Daniel or Jim rather than James.

Authorities say Lightfoot has a number of tattoos. He has a six-point star tattooed on his right forearm and, when he was arrested this summer, he had a pierced tongue.

Lightfoot was convicted in Sac County of second degree sexual abuse in 2002. He was 16 at the time. His victim was a girl under the age of 13.