You are here: Home / Fires/Accidents/Disasters / Dispatcher who was on duty during crash of Flight 232 retiring 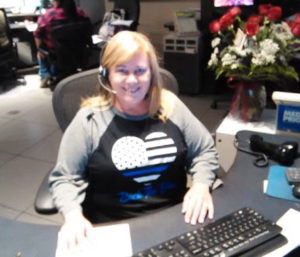 A northwest Iowa woman ended a 31-year career as a 911 dispatcher on Thursday — a career that included sending help to a plane crash with nearly 300 people on board. Louise Keleher says she’ll remember many calls, but none more vividly than the emergency summon she answered 28 years ago.

“Probably the biggest call of all was the crash of Flight 232. I was working fire radio that day. I took the call from the tower and I’m the one who sent out the fire rigs and the ambulances that day,” Keleher said. The crash of United Flight 232 in Sioux City on July 19, 1989 killed 111 people. Another 185 survived.

The plane’s crew and emergency responders were praised for their actions in the incident that most thought would be unsurvivable. Keleher landed the dispatcher’s job after answering a newspaper ad. She noted the technology to dispatch emergency crews has changed dramatically since her first day on the job.

“We had one computer. We did not have anything that we have today. So, everything was hand written on cards and dispatched that way,” Keleher said. While Keleher’s calm demeanor has helped many people in need over the years, the job is often stressful and isn’t ideal for just anyone.

“You miss a lot of family time because you work holidays and weekends,” Keleher said. “It’s something you really have to commit to and have your family’s support before you can do this kind of job.” Keleher’s son is a lieutenant with Sioux City Fire Rescue and has been dispatched on calls by his mother. A reception for Keleher was held Thursday at Sioux City Police and Fire headquarters.