You are here: Home / Agriculture / Report says drainage districts should do more to reduce nitrate pollution 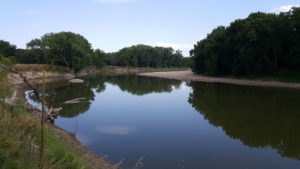 A new report suggests the leaders of Iowa’s drainage districts, the target of a lawsuit dismissed earlier this year, should do more to improve the state’s water quality.

David Osterberg, who co-authored the report for the Iowa Policy Project, believes drainage districts are authorized to reduce nitrate pollution even though they are not required to do so by law.

“They are perfectly set up to do this,” Osterberg said. “And we think that, when you look at what it says in the code, they ought to be doing this.” The report comes on the heels of an Iowa Supreme Court ruling against the Des Moines Water Works’ attempt to sue three drainage districts in northwest Iowa for nitrate pollution cleanup costs.

Sarah Garvin, who helped write the report, suggests drainage districts are still vulnerable to another legal point of attack. “Just because this last case failed, it still leaves the door open for another group or entity to come in and approach it from a different direction,” Garvin said. “Because there are pipes just flowing into ditches, that’s a point source, and public health is an issue because of what is coming out of those pipes and into those ditches.”

According to Garvin, this is not just a water quality issue. She believes farmers would benefit financially if drainage districts improved conservation measures – which would cut down on soil and nutrient loss.

“Finding conservation measures and management measures within a drainage district has the potential to alleviate that economic cost for producers,” Garvin said. “So, the water quality is the public health issue, but the soil loss is an economic issue for farmers.” The researchers note that nitrate pollution from Iowa has contributed to the so-called “dead zone” at the mouth of the Mississippi River. It reached its largest size this year at 8,776 square miles.