You are here: Home / Human Interest / Actors bring those buried in Clarinda Cemetery to life 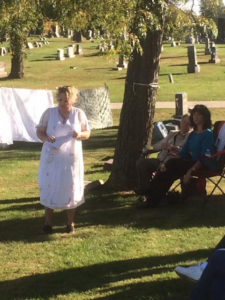 About a dozen people who are buried in the Clarinda Cemetery will be revived by historic reenactors this weekend as Page County residents portray everyday citizens from the community’s past.

“They’re buried about two sections away from each other, the three gentlemen,” Okamoto says. “Halfway in-between, there will be an old card table, like an old wooden table out on the front lawn, as old men used to do, sit around telling stories. So, the three gentlemen will be there telling their story and as the story progresses, of course, the gentlemen pass through history. So that one will get up and walk away, and there will be one left.”

Okamoto says 11 former residents will be featured during the cemetery walk. She says doing the research on each of the departed takes about a year. “And the stories come from various places,” she says. “Old obituaries, old records, to crumpled up pieces of newspaper that come in with other artifacts into the museum that we open and there’s a story.”

Okamoto will be portraying a country school teacher from the 19th century named Phoebe Griffith who claims to have met a mermaid while touring Bermuda. A sea maiden may or may not make an appearance this weekend.

Okamoto stresses this is not a scary event. The annual cemetery walk, a fundraiser for the museum, includes no ghosts or zombies.