You are here: Home / Crime / Courts / Documentary on old Iowa State Penitentiary set to be released 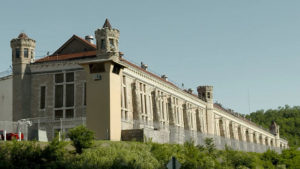 The story of what once was the oldest prison facility west of the Mississippi River is featured in a documentary that will be released on DVD next week.

The one hour film about the old Iowa State Penitentiary is currently being shown at the Fox Theatre in Fort Madison. The Iowa Territorial Prison, opened in 1839, would become known as “The Fort.”

The old Iowa State Pen remained in operation for 177 years before prisoners were moved to a new prison in Fort Madison a few years ago. The film, titled “The Fort,” was produced by Humanities Iowa and includes an interview with the longest serving inmate in Iowa history, Jack Nutter – who misses the old prison. 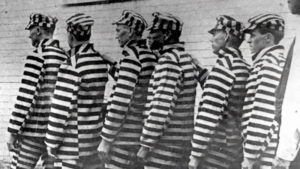 Scene of prisoners from The Fort.

“Well, I grew up down there,” Nutter told the filmmakers. “This isn’t an old person prison.” Nutter was sent to prison in 1956 at the age of 18 after he shot and killed a policeman in Independence.

In many interviews since then, Nutter has said he simply doesn’t know why did what he did.

“They could’ve turned me loose four days after I was here and I’d never got in trouble again,” Nutter said. “Now I’m too old to get in trouble.”  Nutter is now living in the Iowa State Pen’s medical unit. He’s currently the fifth longest serving prisoner in the U.S.

Public tours held at “The Fort” this past weekend are part of an effort to raise money for production of a report that will enable the Department of Corrections to eventually release the property. Private investors have expressed an interest in turning the facility into a tourist attraction.