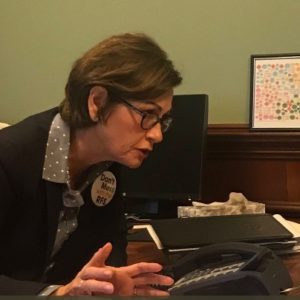 Governor Kim Reynolds today said she is “hopeful” President Trump will direct his EPA administrator to increase rather than decrease next year’s federal production mandate for biodiesel and cellulosic ethanol.

Reynolds spoke by phone this morning with Trump and with EPA administrator Scott Pruitt. A few hours later, Reynolds spoke with reporters in Pella and she was asked if Trump had promised there would be “no cuts” to biofuel production goals.

“No,” Reynolds replied, “but I reiterated my position that that was going in the wrong direction. They understood how important it was to maintain a robust Renewable Fuels Standard.”

Reynolds was joined in Pella by leaders in the biofuels industry who called on President Trump to keep his campaign promise to “protect” the RFS. Iowa Biodiesel Board executive director Grant Kimberley said farm country is “perplexed.”

“It’s discouraging to see this regression from the promise made to Middle America,” Kimberley said.

“President Trump has a decision to make,” Shaw said. “He can take action to put the EPA back on track with his view of renewable fuels. He’s always been very consistent that he wants renewable fuels to be part of his ‘America First’ energy plan or, if he sat back, it would essentially allow the EPA to systematically dismantle the RFS. Now, one path leads to hope for the heartland and one path would lead to a breach of trust that I don’t think would be easily repaired.”

Governor Reynolds described her phone conversation with Trump as “productive” — but she is encouraging Iowans to continue lobbying the president.

“He made it clear that he stood with the Renewable Fuels Standard, so I felt very good after the conversation with him and the EPA administrator,” the Republican governor said, “but that doesn’t mean we stop.”

Republican Senator Joni Ernst is exerting pressure on another front. Ernst has used her authority to place a hold on the person nominated to administer the renewable fuels program in the EPA.

“I am engaged in negotiations with the administrator as well as the White House,” Ernst told Radio Iowa by phone this afternoon. “…Hopefully we can receive those final assurances from them, hopefully in a more public manner, and then we can move ahead with getting nominees into the EPA.”

But Ernst said those confirmation votes in the senate will not happen until the EPA abandons its retraction of renewable fuels production mandates.