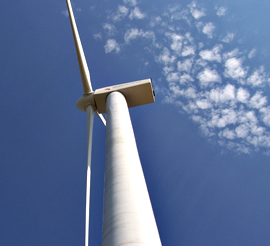 MidAmerican Energy is upgrading more than 700 of its wind turbines at three wind farms spread across six Iowa counties.

Jacobi says, “We just recently began work on repowering, which is refurbishing, some of our older wind turbines with newer equipment that’s designed to generate more electricity, more wind energy, and bring more of that clean, renewable energy to Iowa customers.”

The process involves upgrading the turbines with improved technology and putting longer blades on the existing towers to produce more power.

“We’ve also got work underway in Buena Vista and Sac counties and then at another farm in Crawford and Carroll counties,” Jacobi says. “We have up to 706 wind turbines that are approved to be repowered by the Iowa Utilities Board.”

Jacobi says most of the turbines that are being upgraded were installed in 2004 and ’05, so they’ve been in place well over a decade already. The “repowering” will bring a sizeable boost to the power-generating abilities of each tower.

“It’s going to produce about 19 to 28% more electricity per turbine,” he says. “That’s just more clean energy and all of the benefits that come with that for our Iowa customers without having to do any costly new development and construction.”

MidAmerican has entered into agreements with General Electric to complete the upgrades at the three wind farms.