You are here: Home / News / Reynolds warns ‘liberals are unhinged and…out for us” (AUDIO) 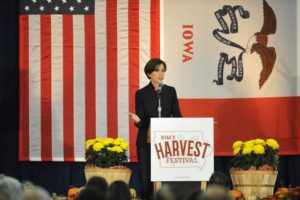 Republican Governor Kim Reynolds hosted her first annual “Harvest Festival” fundraiser on today. It featured supportive remarks from Republican allies and a rousing speech from the governor herself.

“As we all know as we travel the state, the liberals are unhinged and they are out for us and we need to double down and do all we can and if you keep fighting, I’ll keep fighting,” Reynolds said. “Let’s keep this united team together because, my gosh, we want to build on the successes that we’ve seen this last legislative session and we want to keep Iowa moving forward. We don’t want them to come in and reverse the good work that we’ve done, so it’s challenge. I’m in if you’re in.”

Reynolds was sworn in as Iowa’s governor in late spring when Terry Branstad resigned as governor to become ambassador to China. She has been laying plans to seek a full, four-year term in 2018. By this past January, the Reynolds campaign reported having already raised $1 million.

Jeff Kaufmann, the chairman of the Iowa GOP, is neutral in the 2018 GOP Primary race featuring Reynolds and Cedar Rapids Mayor Ron Corbett, but Kaufmann spoke at Reynolds’ fundraiser. He said Reynolds “is going to hold solid” on the GOP’s recent legislative achievements, including the roll-back of union bargaining rights.

“She’s a bright star for our party and a shining leader for our state,” Grassley said.

Ernst, during her remarks, said: “Iowa is the only state in the nation that has both a female senator and a female governor.”

Republican Congressman Steve King of Kiron also took the stage to offer a personal testimonial for Reynolds, recalling his first meeting with her a decade ago.

“I told myself as she walked out that door: ‘This lady has the eye of the tiger,'” King said. “You watch the expressions on her face. You watch the look in her eye, see what she writes down, see what she follows through and does. She means it.”

AUDIO of speeches from Greitens, then Reynolds 26:00

The governor’s “Harvest Festival” was held in a building on the Iowa State Fairgrounds. It started at 4 p.m. with activities for kids like pumpkin painting. The speechmaking started at 6 p.m., after a barbecue dinner was served.