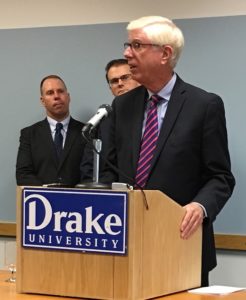 OxyContin is one of the pain mediations at the center of the country’s opioid epidemic. Iowa Attorney General Tom Miller said  attorneys general from all 50 states are involved, in one way or another, in pursuing legal action against responsible parties in the pharmaceutical industry.

“There’s been a series of meetings recently with the industry in Chicago,” Miller said.

Federal prosecutors announced a criminal investigation of the Purdue Pharma company this week. Ten states have already filed lawsuits against drug makers. On Thursday, Miller — who is a Democrat — joined Iowa’s Republican governor at a forum to examine the extent of the opioid epidemic in Iowa and what state policies could be changed to address it.

“I’m a lawyer. I love math and statistics and complicated situations and solutions, but here it’s just so simple,” Miller said, “for me, anyway.”

During a news conference with the state’s drug czar as well as Governor Reynolds, Miller said opioids should be the pain remedy of “last resort.” He blasted pharmaceutical companies for downplaying the “addictive nature” of opioids.

“We should only use opioids in very limited circumstances where nothing else works,” Miller said. “We should use them with a lot of caution and respect and concern about addiction.”

The latest federal statistics indicate 190 Americans die each day from an opioid overdose.

“A friend of mine recently…broke some ribs, which is a painful injury…and she took herself off opioids after 20 days,” Miller said. “Her doctor wanted to give her a prescription for 30 days. I think there is growing evidence that in the 14-21 days of use of opioids, in a regular prescription, is a real danger point for many people in addiction. But 30 days! What planet has that doctor been living in?”

Dozens of lawsuits have been filed against drug makers and marketers, accusing companies of downplaying the risks of addiction to and overdoses from pain medications. In 2007, Purdue Pharma and three of its executives pleaded guilty to misbranding OxyContin and paid 630-million in penalties. Earlier this week, a spokesman for the company said Purdue Pharma is “committed to being part of the solution to our nation’s opioid crisis.”