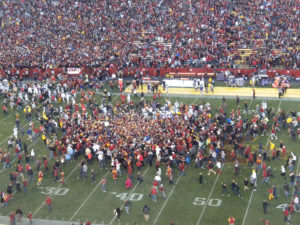 Cyclone fans stormed the field after the upset over TCU.

The Iowa State Cyclones pulled off their second upset of a top five team Saturday with a 14-7 win over fourth-ranked TCU on a chilly afternoon at Jack Trice Stadium.

Coach Matt Campbell says the win over a very good team came because his team never stopped playing hard — even when there was some adversity. 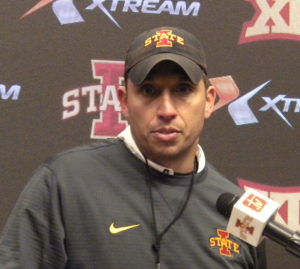 “I think the biggest thing I’d say about our kids is that we played harder longer, which is really rewarding to see,” Campbell says. He says it is hard to keep up the effort throughout the entire game.

TCU’s only score came on a 94-yard kickoff return for a touchdown to start the second half. The Cyclones picked off two Horned Frog passes and recovered a fumble — but Campbell says those weren’t the plays that turned the game.

“The red zone stop down on the goal line is the difference,” Campbell says. He says the coaches came to the huddle after TCU called a time out and told the defense to just keep playing. Campbell says getting the team to buy into what they been trying to do to turn things around has been a big key to their 6-2 start.3.

“We all want to win the game 60 to nothing — but that’s not real. The real football at this level is that you’ve got to grind it out, and there’s a rhythm and a way to win football games and you’ve just got to be able to pick it out, and figure it out and then just stay the course,” Campbell says. “And I think our kids have really bought into that and understand that.” 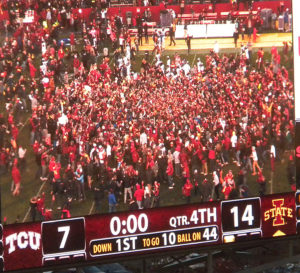 Iowa State started the month of October with an upset of then number three Oklahoma and then got wins over Kansas and Texas Tech before Saturday’s upset of TCU.

They now find themselves bowl eligible and at the top of the Big 12 standings. Campbell says he hasn’t really thought about how quickly they’ve turned things around.

“All you want to do is get your team to November and have the chance to be playing for something. And that’s where we are finally at. We talked about that as our goal when I got here,” Campbell says. “And you don’t know whether that is going to happen — you just put your head down and stay the course and really work…and this is happening not because of coaching but because of player ownership.” 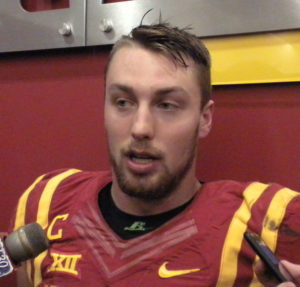 Senior linebacker Joel Lanning says it’s hard to realize the team is bowl eligible after not having winning seasons since he’s been at ISU.

“I mean it’s huge, it hasn’t even set in honestly that we are eligible for post-season play. We are not done here though, we have other games that we are going to try and win,” Lanning says.  Lanning says they are not happy just getting enough wins to go to a bowl.

He says they want to win championships and turn the program around.

Quarterback Kyle Kempt has won four straight games since becoming the starter. He threw for 202 yards and two touchdowns in the game.

“We felt great going into the week that they were going to give us chances on the outside, It was just about putting the ball in the right place and giving our guys a chance to make plays,” Kempt says. Kempt says the kick return for a touchdown to start the second half didn’t bother the team, as they were confident in how they were playing.

He says they knew TCU was going to get a touchdown at some point as they are a great football team and he says none of the Cyclones quit on defense, offense or special teams and they just kept executing what they had to do.

The Cyclones will look to continue the win streak on the road Saturday at West Virginia.