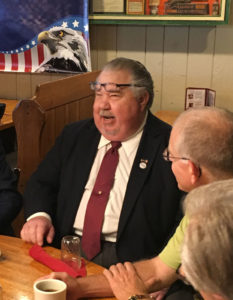 Sam Clovis, the former Morningside College professor who served as national co-chair of the Trump presidential campaign, has asked the president to withdraw his nomination to serve as the top science officer in the U.S.D.A.

Clovis sent President Trump a letter, saying “the political climate in Washington has made it impossible for him to receive balanced and fair consideration” for the U.S.D.A. job.

Court documents released this week show Clovis was the campaign supervisor of volunteer foreign policy advisor George Papadopoulus. Papadopoulus has pleaded guilty to lying to the FBI about his contacts with Russians. Clovis, in his letter to the president, said attacks on Trump and his team are increasing every day and have turned into a “blood sport.” Clovis said didn’t want to be a distraction to Trump’s agenda.

Clovis concluded his letter by saying he remains a devoted and loyal supporter — and will continue to serve as a senior White House advisor in the U.S. Department of Agriculture. Clovis was a radio talk show host in Sioux City before running for the U.S. Senate in 2014. He joined the Trump campaign in August of 2015.

“Sam Clovis is not going to push something that involves a job for him if he believes that withdrawing his nomination is going to be best for the country,” Kaufmann said. “He’s a veteran and a selfless guy.”

Democrats had been complaining that Clovis lacked a science background for the job of chief scientist in the U.S.D.A. The top Democrat on the U.S. Senate Ag Committee said “emerging information” about Clovis’ role in the Trump campaign raised more concerns.

Clovis is a Kansas native who had a 25-year-long career in the U.S. Air Force. Clovis moved to Iowa to take a job teaching economics at Morningside College and the Iowa GOP’s chairman expects Clovis to return to Iowa after he’s done serving in the Trump Administration.