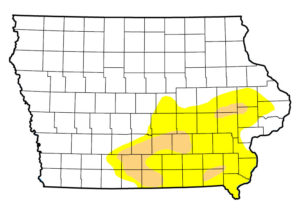 The state saw twice the normal amount of rainfall in October — which didn’t help farmers who wanted to get on with the harvest — but it did have some long-term benefit.

Tim Hall with the Iowa Department of Natural Resources says the dry ground soaked up the rains and wiped out the worst of the state’s drought conditions.

“We made up over a couple of inches of lost rainfall in October and it really helped — it really helped to ease the drought situations in southeast Iowa,” Hall says. “Grounder looks pretty good, streamflow conditions are at or slightly above normal across the state. So, it put us in pretty good shape heading into the winter months.” Hall says fall rainfall is always important in filling up the groundwater supply heading into winter.

“Once the ground freezes, it becomes a lot more challenging to get any moisture into the soil. So, it’s nice going into the winter to have soil moisture recharged from some rainfall,” Hall explains. He says all the extra rain came slowly and didn’t cause many problems other than delaying the harvest.

“We didn’t get a lot of flooding in the state, which is somewhat unusual when we get twice the normal rainfall. We avoided the bad part of excess moisture and I think we are just going to reap the benefits of it,” Hall says. This year has been up and down when it comes to the water situation, as a wet spring turned into a dry summer. 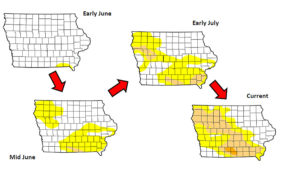 This shows the progression of the drought in Iowa this year.

“We saw a lot of improvement earlier in the year and then it got really concerning — particularly parts of southern and southeast Iowa — where we saw some of what’s rated by the National Drought Mitigation Center as D-3 extreme drought and we saw a little pocket of that,” Hall says. “And there’s always a concern when you see a pocket — you don’t know if it’s going to continue to expand — of if it’s going to be a short-lived event and it’s going to go away.”

The extreme drought conditions have gone away, and the state is down to a small area of moderate drought and abnormally dry conditions in southeast Iowa.