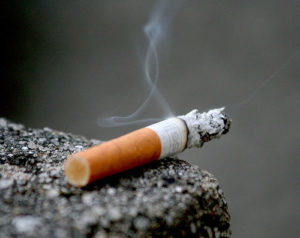 A new report from the Centers for Disease Control shows one in five American adults were smoking or using other tobacco products regularly in 2015.

“In Iowa, our news is even better,” said Garin Buttermore, a community health consultant for the Iowa Department of Public Health.

Iowa’s smoking rate has been declining and was 18.5 percent when it was last measured in 2014.

“There’s still a lot of work to be done,” Buttermore says. “You can see that as you drive down the street, as you might visit some friends’ homes, as you walk outside of bars and restaurants.”

But Buttermore credits the 2008 state law that banned smoking in most workplaces and public places for greatly reducing “second-hand smoke” exposure.

“That is huge and it is one of the reasons the smoking rate in Iowa is lower than the national average,” Buttermore says.

The Centers for Disease Control report indicates there are four main strategies for reducing smoking rates and a Clean Indoor Air Act like Iowa’s is one of them. Raising the price of tobacco products is another deterrent. Iowa policymakers last raised the state tobacco tax in 2007 and Iowa’s cigarette tax currently is in the middle of the pack when compared to the other 49 states. Buttermore says the state-run “quit line” is helping to push Iowa’s smoking rate lower.

“A lot of work to be done, but the results are in where we can definitely see that Iowa rates are definitely dropping below the national average,” Buttermore says, “and that has to do with a lot of the good work that we’ve been doing for almost 20 years now.”