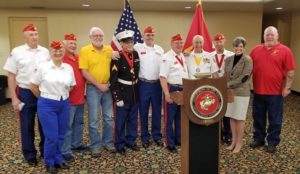 A 91-year-old man from Burlington who is a veteran of three foreign wars was honored with a private ceremony today in the Burlington Memorial Auditorium.

“I’m kind of overwhelmed today because I just never did know that anything like this would ever happen,” said Al Nelson, a former Marine who enlisted when he was 18.

U.S. Senator Joni Ernst was on hand today to present Nelson with a flag that was flown over the U.S. Capitol. Ernst, a retired Iowa National Guard officer who did a tour of duty in Iraq, also presented Nelson with something a bit more personal.

“There is a tradition in the military of challenge coins,” Ernst said. “…It’s a tradition I’m carrying on in the United States Senate.”

Ernst gave Nelson a coin that features the U.S. Senate emblem on one side and the Iowa flag and a Minuteman on the other. Nelson gave Ernst a gift in return — sand from the beach at Iwo Jima. Nelson, who was a gunnery sergeant in the Marines, had been given the sand during a peacetime trip to the island. The Marines landed on Iwo Jima on February 19, 1945, and captured it from the Japanese 35 days later.