The Sullivan Brothers Award of Valor.

Four firefighters from Marion and an Iowa State Patrol trooper were honored at the state capitol this morning for rescue efforts that their supervisors describe as “heroic.”

Marion Fire Chief Deb Krebill said her fire fighters dove in to rescue a trucker who’d veered off Highway 151. The rig ended up partially submerged in a pond.

“It’s very seldome that firefighters and police officers get the recognition that they so deserve and the effort they put into the rescue was phenomenal,” she said.

The temperature was 15 degrees on that December day last year. There were snow flurries. The water was freezing. The driver was pinned inside the cab. It took the four-man crew nearly an hour to get the driver out.

“A lot of guys, once they were in there that long and they were absolutely exhausted, they would have gotten out and said: ‘O.K., next crew go in,’ but they didn’t. They were going to stay there until it was done,” Krebill told reporters. “They were freezing. They were exhausted and they did not give up and, as a fire chief, I could not be more proud.” 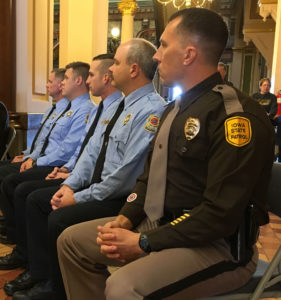 Marion Firefighters Jeff Hoover, Peter Lammer , Jeremy Smith and Zachary Bruce each received a medal and a plaque today as this year’s recipients of the Sullivan Brothers’ Award of Valor. The award is named for the five Sullivan brothers from Waterloo who died together in World War II when their ship was sunk.

“He’ll say, ‘Oh, anybody would have done it,'” said Sergeant Bret Tjepkes, Henningsen’s boss. “Well, I don’t know about that. Until you’re in that situation and faced with that kind of danger.”

The car burst into flames soon after the trooper pulled the driver out.

“Dustin’s very humble. I’m very proud of him. He’s just great to work with and in this deal, you know, when you hear about how the smoke hit him in the face and he stepped back, but he still recognized: ‘The man is still in there. I need to get in there and get him,'” Tjepkes told reporters. “I mean he definitely risked his life and saved a life.”

The driver of the car had suffered some sort of medical incident before his vehicle crashed into the ditch, but the driver eventually made a full recovery. The truck driver rescued by the Marion firefighters also recovered from that accident.