You are here: Home / Crime / Courts / Law officers put together holiday food packages for the needy 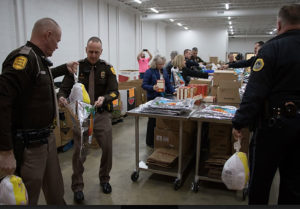 It took about 20 minutes for officers to assemble the 150 meal kits that food will be distributed to families in need in all of Iowa’s 99 counties, plus a couple dozen more in Des Moines. Colonel Jeff Ritzman is the Chief of the Iowa State Patrol says it’s their way to help out.

“If we’re able to help with food security, I think there’s a great trickle effect to that and everybody benefits,” Ritzman says. Law officers raised the funds for the food and he says it is an opportunity to show law enforcement in a different role in the community. 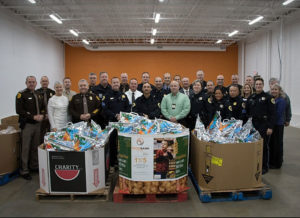 “Law enforcement has been portrayed in a negative light in some ways and this is really an opportunity for us to do something that everyone sees as positive,” according to Ritzman.

The kits include a frozen turkey and other traditional Thanksgiving fixings.