You are here: Home / News / Reynolds wouldn’t say ‘no’ to a Trump assist on 2018 campaign trail 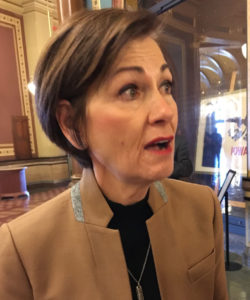 Some of the nation’s Republican governors told New York Times reporters last week that they’re concerned about campaigning alongside President Trump next year.

Trump easily won Iowa in 2016 and he held a campaign-style rally in Cedar Rapids this past June. Reynolds said she is “grateful” for the way Trump has listened to concerns about federal biofuels rules and the breakdown of Iowa’s individual health insurance market.

Reynolds suggested the GOP’s political prospects in 2018 may hinge, instead, on the record of the Republican-led congress.

“Right now, if they can get tax reform done and if they can come back and get something done with health care, then I think it’ll be a much different environment,” Reynolds said today. “If they can’t get something done, I think the sentiment is not going to be good, so what I talk about a lot of times is, you know, what we were able to get done in Iowa and I contrast that to Washington, D.C.”

Voters in Iowa and 35 other states will cast ballots in governors races in 2018.