You are here: Home / Agriculture / Turkeys from farm near Wayland pardoned by the governor 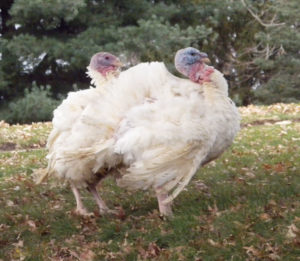 Spuds and Gravy were pardoned by the governor.

Two turkeys raised near the Henry County town of Wayland in southeast Iowa were pardoned today in the annual ceremony at the Terrace Hill governor’s residence in Des Moines.

The two tom turkeys named Spuds and Gravy gobbled right on cue as Governor Kim Reynolds prepared to set them free.  Those in attendance laughed when the turkeys interrupted the governor and she replied, “It’s all about them, they’re thankful.”

It was cool with gusting winds on the hill behind Terrace Hill as Reynolds read a proclamation freeing the two birds. “Now therefore I, Kim Reynolds, Governor of the State of Iowa do proudly proclaim…Spuds the turkey and Gravy the turkey (more gobbles) free from harm of carving knives and gravy this Thanksgiving day,” Reynolds says. 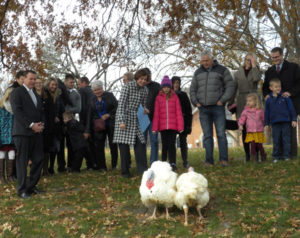 The two turkeys came from the farm of Russ Yoder — who says he is proud to continue the family turkey tradition — which included his uncle presenting turkeys to be pardoned 40 years ago to then Governor Bob Ray.

“It’s been a family tradition, we’ve been raising turkeys since 1937. My grandpa started back in the day and I’m just kind of continuing the tradition,” Yoder says.

Spuds and Gravy were pulled from a group of turkeys Yoder has been raising. “These birds are about 20 weeks old and they weigh about 45-50 pounds, hormone free, thoughtfully raised, on a corn, soybean meal diet,” according to Yoder.

The governor’s pardon spares the turkeys from going to the processing plant to be made into deli meat for sandwiches. “The brothers all went to market last Wednesday and we held these back. They had a nice pen in the shop with some feed and water, and now they are going to go to Living History Farms,” Yoder says. 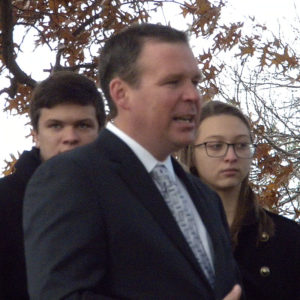 Yoder, who is 42, says the pardoning ceremony brings things full circle for him in the turkey business. He started early as the second youngest and only boy among the kids of the four family members who were in the business.

“So I thought it was kind of what I had to do,” Yoder laughed, ” I kind of got spoiled being the only boy. I get sent to all aspects of the operation. I helped my uncle who got to do this — he ran the turkey hatchery — I helped him and the next day I’d be in the brooder house helping my other uncle. My dad would says ‘hey we need help over at the feed mill’, so I got passed around in all aspects of the operation and so it just kinda felt normal like that this is what I was gonna do.”

Yoder says his two youngest boys — who are 4 and 2 — love going out on the farm with him as he works with the turkeys. Iowa growers produce around 12.1 million turkeys on about 130 farms every year. The majority of the Iowa-grown turkeys are processed at the Tyson plant in Storm Lake and the West Liberty Foods plant in West Liberty.