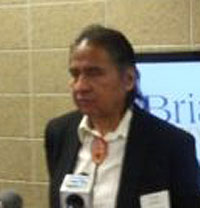 Briar Cliff University in Sioux City has been hosting a series of educational events this week dealing with Native American children who have been taken from their families and placed in the country’s child-welfare system.

The events led up to today’s 15th Annual March to Honor Lost Children in Sioux City. Spokesman Frank Lamere says locally, the Department of Human Services has been doing a better job in recent years of finding a way to place Native American children from troubled homes with other relatives.

“What we have with DHS now is a true picture of where we are at with them. And I want to say that we are extremely high with relative placement,” Lamere says. ” Our issues in the beginning had to do with taking native children from homes and putting them in environments with their own family. And DHS in Woodbury County and the state of Iowa have sought to do that, and I think they’ve done it very successfully.”

But Lamere says there is still much to be accomplished to keep children from being separated from their families and tribes, while also being vulnerable to abuse, neglect and death. The march keeps the spotlight on the issue.

A Memorial Dinner is planned at the Sioux City Museum after the walk ends.