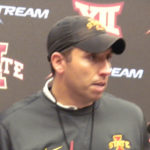 Iowa State football coach Matt Campbell has agreed to a new six-year contract worth $22.5 million. Campbell’s guaranteed annual salary will increase from $2.1 million to $3.5 million effective immediately. The athletics department has also agreed to provide Campbell an additional $1 million for incremental raises for his staff.

“I want to thank Jamie (Pollard) for respecting my desire to hold off these conversations until our regular season ended and also for being proactive in supporting the needs of my staff and team as we build a legacy at Iowa State University,” Campbell said. “The commitment that he and Iowa State have made to us – including some exciting facility enhancements on the horizon – has been critical to my vision for our team going forward.”

Campbell’s 2017 team was 7-5 overall and 5-4 in Big 12 play, matching the school record for conference wins in a season. The Cyclones’ fourth-place tie in the league was their best as a member of the Big 12. Iowa State defeated both Oklahoma (then third-ranked) and TCU (ranked fourth at the time) this year. ISU had one win over a top five school in its history prior to 2017. ISU is bowl-eligible for the first time since 2012 and will learn its destination this week.