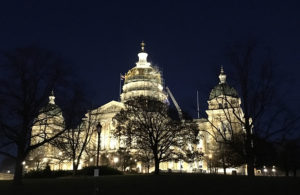 The State Capitol lit by the new LED system.

Iowa’s Golden Dome has a different kind of glow after sundown.

The high-pressure sodium lights that cast an orange tint on the state capitol at night are gone.

“It was April of 2016 when we first did the demonstration on the west side here,” Berns said. “It’s been a long process, but we’ve finally made it to the night to turn them all on.” 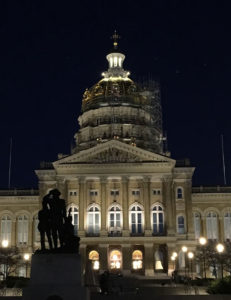 Berns and his team made some final adjustments last night. Musco installed similiar lighting systems at the White House in 2008 and for the Statue of Liberty in 2015.

“Nice to finally bring it to Iowa and show what can be done on the Capitol Building,” Berns said.

LED lighting is cheaper and Berns said it will cut the electric costs for “light-scaping” the capitol “by about two-thirds.”

“It’s also more efficient at getting light to what you want it,” Berns said. “…The other huge advantage with LED is maintenance costs. The light source in past lighting fixtures was the weakest link of the system. Now, the light source with LEDs will last hundreds of thousands of hours if you control how they’re operated and monitor the heat and get that away from the fixture. They can last a tremendously long time.” 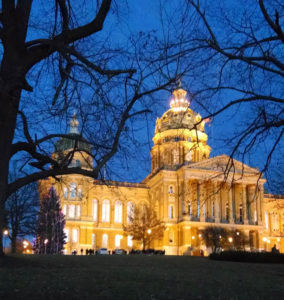 The State Capitol lit with the old system.

In 1988, ABC Television crews used lights to illuminate the exterior of the capitol building for the network’s Caucus Night reports. State leaders, including then-Governor Terry Branstad, liked the look so much they decided to make nighttime lighting permanent.

Berns said Iowa’s statehouse is the only one in the country that has one of Musco’s new LED systems.

“I think the biggest reaction is just being able to see the colors that the capitol really is rather than orange at night and just the truer color that you see on the dome,”

Berns just returned to Iowa from the United Arab Emirates where he met with Musco teams working on lighting sports stadiums in the Middle East as well as Europe. 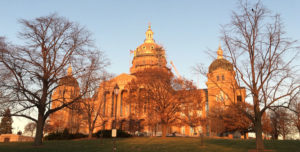 The State Capitol before sundown.

Musco is also working on new lighting at Kaufmann Stadium, the home field for the Kansas City Royals, and two other Major League Baseball stadiums.