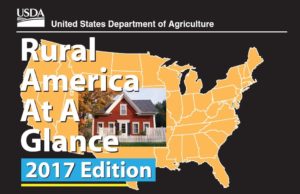 A new report from the U.S.D.A. shows the urban-rural poverty gap continues to close. John Cromartie is with the U.S.D.A.’s Economic Research Service. “Today, the gap is around three percentage points, around 16 percent rural poverty versus 13 percent urban poverty,” Cromartie says.

The gap has been slowly declining since 1960 when the Rural America at a Glance Report was first published. At that time, 54 years ago, the gap between rural and urban poverty was at 17 percent.

The report also found the rural population is shrinking for the first time. U.S.D.A. credits fewer births, an aging population and an outmigration of young adults for the decline.

Employment in rural areas since 2011 has increased modestly with medium incomes also increasing. The report says infrastructure investments like access to broadband and more public services could improve rural economies and quality of life for residents.

In Iowa, just under 36-percent of the state’s residents live in rural areas. According to the most recent data from the U.S.D.A., the poverty rate in rural Iowa is 11.5.percent, compared with 11.9.percent in urban areas of the state.