You are here: Home / News / Bird watchers enjoying an increase in Snowy Owls in Iowa 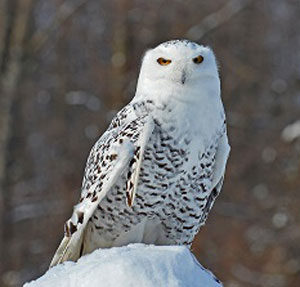 The birds are protected under the federal Migratory Bird Treaty act and generally live in the frigid climates found in the Arctic. Carroll County Naturalist, Matt Wetrich, says the creatures usually appear in Iowa during the colder months, just not in such large numbers.

“Through an entire winter we might see a handful of snowy owls in Iowa, that’s an average winter, 10 or less, maybe even five,” Wetrich says. “In the last month we have had at least 40 individual birds across the state.” He says the increase, while exciting, is not that uncommon. The primary food source for snowy owls is lemmings. These small rodents see massive population spikes about once every five to 10 years, and that increase in food is reflected in snowy owl populations. Wetrich says the new birds when they migrate south, and they end up traveling farther than

He says the new owls get bumped out of the winter hunting grounds and they get pushed south. Wetrich says they are ending up in Iowa and other states in the U.S. Snowy owls are almost entirely white and quite popular among birdwatchers. Wetrich says it is okay to appreciate their beauty — but says give them some distance.

“If you are close enough where the owl is turning looking at you, you are close enough, and that means back away,” Wetrich explains. “You don’t want to approach them and cause them to fly — because what happen is then they are burning very valuable calories. And you are contributing to them struggling to find food.” Wetrich is collecting data on sighting across the state for the Iowa Ornithologists’ Union to use for research on these population eruptions. He asks anybody who sees a snowy owl report the sighting to the Swan Lake Conservation Center by phone at 712-792-4614 or through the Carroll County Conservation Facebook page.