You are here: Home / Fires/Accidents/Disasters / Ernst pressing for changes in formula for water infrastructure projects 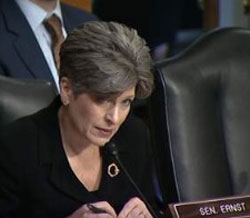 The Army Corps does have some authority to make exceptions to its funding formula requirements, but Ernst says the money is still going to the coasts where property values are far higher.

“In Fiscal Year 2017, four of the five projects receiving funding under this ‘human safety exception’ were in California,” Ernst says.

Ernst spoke during a Senate Environment and Public Works Committee hearing with the man nominated to be assistant secretary of the Army for Civil Works. That nominee — Rickey Dale James — is from Missouri and he has served on the Mississippi River Commission.

“It’s not right that there’s people in this country will never, ever get any type of water infrastructure project under the current BCR analysis,” James said.

The benefit-to-cost-ratio has been used by the Army Corps of Engineers since 1936. Congress has passed legislation in 1974 and 2016, directing the agency to make adjustments, so more areas of the country qualify for federal support of water-related infrastructure projects.