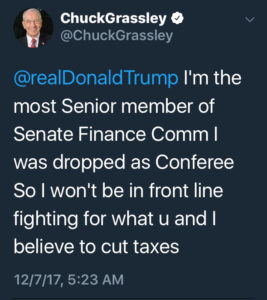 Senator Chuck Grassley sent an early morning tweet, suggesting he’d been cut from the roster of senators who’ll work on a tax package.

Grassley said he had been “dropped” as a member of the conference committee that will come up with a final version of the tax bill. Grassley mentioned President Donald Trump in his tweet. Grassley said he wouldn’t be “in the front line fighting” for what he and Trump believe should be in tax package.

Grassley is the former chairman of the Senate Finance Committee, the panel that writes tax policy. Grassley remains on the committee and, in his tweet, Grassley notes he is the committee’s “senior Republican.”

Last week, Grassley sparked attention with a comment about the estate tax. Grassley said eliminating the estate tax rewards people who save and invest rather than those who spend “every darn penny they have, whether it’s on booze or women or movies.” Earlier this week, Grassley told Radio Iowa his comments were not about people who live paycheck-to-paycheck but about two fictional people — one who saves and one who “doesn’t save anything.”