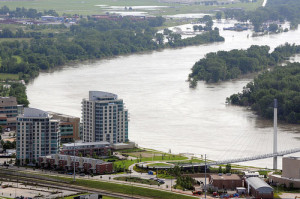 Thanks to a wetter-than-normal year, water releases from the reservoir system which regulate the Missouri River are being cut back for winter, but not as drastically as normal.

The U.S. Army Corps of Engineers is preparing the river for the season ahead. The Corps’ Mike Swenson, one of the Missouri River Water Management Office team leaders, says the overall goal is to prep reservoirs to handle runoff from rain and snowpack melting in the spring.

“It’s still a lower release than we have during other times of the year, but it’s just slightly higher for the winter,” he says. Swenson says the higher levels will have multiple impacts.

“With the higher winter release, that does provide some benefits to hydropower, a little bit more winter energy produced,” Swenson says. “It typically helps out the water intakes below the reservoir system.” He says the higher water should also help prevent ice jams this winter.