You are here: Home / Agriculture / Reynolds heading to DC for meeting with Pence about NAFTA 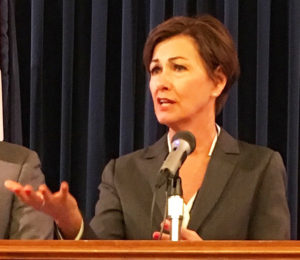 Iowa Governor Kim Reynolds will be among four Republican governors who meet with the vice president on Thursday. Reynolds says they’ll discuss “the importance” of the North American Free Trade Agreement.

“We’re o.k. with modernizing the language with NAFTA,” Reynolds says. “It’s a 25 year agreement. We believe in fair and free trade, but that’s our number one and two trading partners. It would have a tremendous impact if we were to withdraw from NAFTA.”

The governors of Michigan, Tennessee and Arkansas will join Reynolds in the meeting with Vice President Mike Pence, the former governor of Indiana.

President Trump has called NAFTA “a disaster” and U.S. Ag Secretary Sonny Perdue has warned the negotiations with Mexico and Canada are a “bumpy ride.” Governor Reynolds says ending the agreement could “devastate” Iowa farmers.

“With farm prices and commodity prices where they are today, we need to do everything we can…to make sure that we can maintain the existing footprint that we have for our trading partners,” Reynolds says, “and look for opportunities to expand that.”

According to federal records, Iowa has a trade surplus with both Canada and Mexico. Last year, Iowa exported $3.3 billion worth of goods to Canada. Exports to Mexico topped $2.3 billion. Half of all Iowa corn exports go to Mexico.