You are here: Home / News / Drought conditions move back into parts of the state 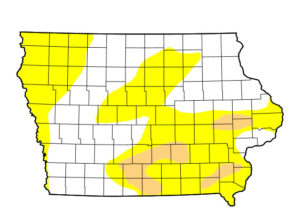 A dry November has led to “abnormally dry” conditions returning to parts of the state.

Tim Hall of the DNR compiles the water summary for the state. “We’ve had a consistent area in the southeast part of the state that’s been abnormally dry or even moderate drought, but northwest Iowa was out of the water for awhile — but it’s sort of crept back in. We had a very, very dry November, and it’s starting to draw parts of the state back into the picture,” Hall says. He says it is not unusual to see things dry out in the winter.

He says January is our driest month of the year in terms of precipitation and he says we’re in a fairly dry time of the year. Hall says being dry now has less impact than other times of the year.

“The good news for water supplies is that demand for water is typically pretty low this time of year — there’s not a lot of people doing outdoor water use,” he says. “So if groundwater levels are low, it’s better to have them low in the wintertime when water demand is not very high.”

Hall says the flow of rivers and streams across the state have been running close to normal.