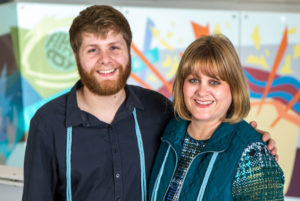 Two students graduating from Iowa State University this weekend are a mother and son who will both be celebrating their induction into the teaching profession.

Kathleen says she only bumped into her son on the Ames campus a few times. “Mostly, I didn’t see him around. It was nice because it’s a big enough university that it gave us both the freedom to…I mean, he didn’t have to have people know that his mom was there if he didn’t want them to know that,” she said.

Kathleen first went to ISU after graduating high school, but stepped away (for two decades) to become a stay-at-home mom. Shortly after Zack, the second of her four sons, split for Ames, she decided to follow.

“I was only left with two at home and they were getting pretty self-sufficient. So, I thought at that point I needed more to do. I didn’t want to be home with the dog,” she said. “I decided this was the time. The time was right and if I didn’t do it right then, then I wouldn’t do it.”

Zack didn’t have any classes with his mom, but he’s still somewhat surprised they didn’t see each other more often. “But, every time I would run into her it was a little strange. You know, you’re at college, you don’t necessarily expect to bump into your mother. When I did, it was like, ‘oh, there’s my mom,'” he said, laughing. “It was definitely something different.”

This morning (10am), Zack and his mother will be presenting light blue cords to one another at a cording ceremony at C.Y. Stephens Auditorium.

“Not a lot of people can say they’ve graduated with a parent,” Zack said. “I think it’s something cool and something I’ll always remember and cherish.” Kathleen plans to do some substitute teaching, initially, while she pursues her reading endorsement before fulfilling a dream of leading her own classroom. This week, Zack completed a student teaching assignment at Boone Middle School.

He’ll be looking for teaching jobs in Cedar Rapids where his fiancé is a full-time teacher. The couple is planning a June wedding. Two graduation ceremonies will be held in Ames this weekend honoring over 2,400 students who are completing degrees at Iowa State University.