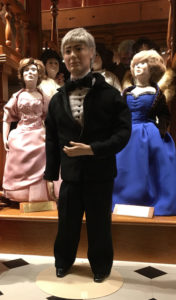 A male doll has joined the 43 female dolls in a statehouse display that until now has represented former Iowa first ladies.

The display was launched in 1976 by First Lady Billie Ray. There’s a doll for every Iowa first lady, wearing a replica of the gown they wore at their husband’s inaugural ball. Kevin Reynolds wore a black tuxedo to his wife’s inaugural ball this past spring and a tuxedo-clad Kevin Reynolds doll now stands in the center of the statehouse doll display.

First Spouse Kevin Reynolds unveiled the doll himself this afternoon.

“I’m honored to be the first gentleman to join this unique collection,” he said.

There were a few gasps and a lot of applause from on-lookers as Reynolds lifted a black cloth and revealed the doll. A reporter asked Reynolds if he thought the doll looks like him. 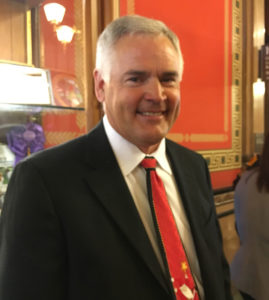 “The hair kind of looks like me,” Reynolds said, laughing along with the crowd.

When asked by a reporter if Mattel had been notified there was now a Kevin doll to replace Ken, the reply from the first spouse was a loud, “No,” and the crowd laughed.

Some of the governor’s staff, the media and a few statehouse visitors gathered in the hallway outside the governor’s office for the unveiling. Joan Arnett, the chief tour guide at the state capitol, was in the same spot in 1976 when the doll display was first unveiled. 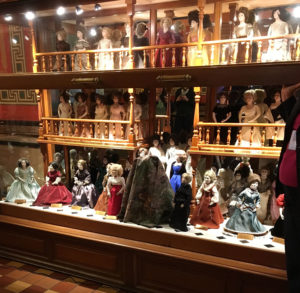 The Kevin Reynolds doll in the display before the unveiling.

“There were two things that I could have never imagined that day,” Arnett says. “One would have been that in all the years following we would only put in four dolls until today and that one of those would be the same first lady, different decade, different dress and the second thing that I couldn’t have imagined is that it would take this long to have a woman serve as governor.”

“I asked Billie Ray what inspired her to start this in the first place and she said that she’d gone to the nation’s capitol and seen the gown exhibit there and she thought, ‘You know, that’d be pretty good for Iowa to have something like that,'” Reynolds said. “…That’s what started all this.”

Arnett, the chief of statehouse tours, said the first spouse doll collection is a popular spot for the hundreds of thousands of Iowa schoolkids who’ve visited the capitol the past 41 years.

“They stand in front of the case and as the tour guides explain what they’re looking at, talk about the histories of the governors, there are two questions that always come up,” Arnett said. “And one of those questions is: ‘Why isn’t there a man in the case?’ And the other question is: ‘If there is a woman governor, what doll will we put in the case?’ So I have to say that today we really have the answers to those questions.”

A doll-maker in Colorado has made several male replicas of the Kevin doll — with its porcelain head, hands, feet and cloth body. A Kevin doll — with a new outfit — will be used to stand-in the next time there’s a male “first spouse.” The State Historical Society already has dolls in the likeness of Billie Ray. That’s why all the other dolls in the display have the same face. The dresses are different representations of inaugural gowns worn by former Iowa first ladies.