You are here: Home / News / Iowa goes from White Christmas into the deep freeze 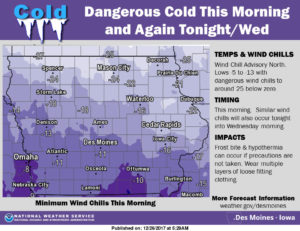 Iowa’s coldest temperatures of 2017 have arrived on the final week of the year.

A few locations in northern Iowa reached double digits below zero this morning. A reading of 19-below was reported at Waukon.

State Climatologist Harry Hillaker says the last time a lower temperature was recorded in Iowa was on December 18, 2016 when Rock Rapids was at -29. Estherville and Swea City hit 14-below this morning, while Mason City dipped to 10-below zero.

National Weather Service meteorologist Ken Podrazik says even colder air will move in this weekend with actual highs only in the single digits above and below zero.

“We’ll have a little bit of…if you want to call it a ‘warm up’ on Thursday and Friday, but it will be in the mid-to-upper teens for high temperatures. Then, we’ll be back in the deep freeze for the weekend,” Podrazik said. In addition to the cold, the last week of 2017 could include a little bit of snow — tomorrow night into Thursday.

“Mainly, north of Interstate 80 could see 1 to 3 inches of snow,” Podrazik said. “So, not significant as far as blowing an drifting, but it might cause some snow-covered roads and maybe hazardous travel at times.” Another chance for a little snow is in the forecast for Friday.

“That one really only looks like maybe an inch to an-inch-and-a-half for the central and southern portions of the state,” Podrazik said.