You are here: Home / Fires/Accidents/Disasters / Cold causes extra stress on furnaces that had been sitting idle 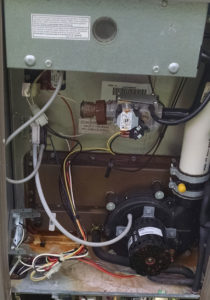 Problems are showing up in furnaces now that the temperatures have dropped dramatically.

The steep drop in temperatures has exposed a lot of issues with furnaces that are now running constantly. West Des Moines Fire Marshal Mike Whitsel says his department noticed it right away when the cold snap hit.

“We have seen an uptick in calls for furnaces that may catch on fire or have mechanical issues,” Whitsel says. Whitsel says it seems the earlier mild temperatures made people forget about having their furnaces tuned up.

“A lot of people seemed to have delayed their annual service on those because we were in the 50s all the way up until about a week ago,” according to Whitsel. “So if there is a mechanical issue with them, now we are seeing these things are starting to run very frequently due to the cold weather. we’ve see several of them where maybe belts go bad or there is a mechanical issue that has caused the house to fill with smoke or small fires.”

He says a fireplace can be also be dangerous if you have not maintained it throughout the year. Whitsel says, “Never use your fireplace unless you have maintained that woodburning fireplace routinely and to what the experts say.” Many people are turning to space heaters to supplement their furnace. He says that’s okay as long as you take precautions.

“There are good space heaters and there also some that aren’t really good to use in the home,” Whitsel says. He says you need to get a space heater that is listed by a company such as UL. Get one that is cool to the touch and will shut off automatically when it falls over. Also be sure the heater is plugged into an outlet that can handle it.

“Whenever you open up a brand new box if you buy a new space heater — always look at the manufacturers instructions for what they recommend on how to use it,” Whitsel explains. He says space heaters need their space to prevent fires and you shouldkeep the areas around them clear so there is nothing near them that can catch fire and they can effectively heat.