You are here: Home / Fires/Accidents/Disasters / Traffic deaths dropped in 2017 compared to previous year 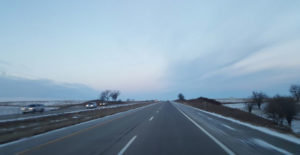 Iowa State Patrol Sergeant Nate Ludwig believes a new state law designed to curb distracted driving was a factor. “I think just the awareness…people putting their phone down is probably the biggest thing,” Ludwig said. “The texting law that went into effect on July 1 makes it a primary offense. We see a lot of accidents because of distracted driving.”

Preliminary figures from the Iowa DOT show 330 people died in traffic crashes across the state in 2017. That’s down from 402 in 2016. While the texting law may’ve helped reduce fatal crashes, Ludwig still believes too many drivers are putting their lives and others at risk because they won’t stay off their phones.

“You still see people texting all over,” Ludwig said. “It’s a real problem. You can’t go anywhere on city streets or the interstate and see someone without a phone in their hand.” Another factor in the decline in fatal traffic crashes may be the relatively mild start to this winter. There were more than twice as many fatal crashes in November of 2016 (35) compared to the same month last year.

“There were only 16 fatalities in November of (2017) and November is typically the month where we see the most (fatal crashes),” Ludwig said. “In (November) 2014, there were 46 fatalities.” Just over 100 of the people killed in Iowa traffic crashes last year were not wearing a seat belt. Ludwig suggests Iowa can easily reduce the traffic fatality count even further in 2018.

“As long as people change their driving habits – they slow down, put their phone down, and start wearing their seat belt – we’re going to see that number go down,” Ludwig said. The DOT reports 88 of the 330 traffic-related fatalities last year involved someone on a motorcycle, a bicycle, or a pedestrian who was hit by a vehicle.