The state’s top-ranking Republicans gathered for a breakfast fundraiser early this morning, celebrating the Republican agenda that cleared the 2017 legislature and promising to advance more GOP priorities in 2018. Republican Governor Kim Reynolds listed “tax relief for working class Iowans” as job number one.

“We’re not going to go backward. We’re going to keep going forward,” Reynolds said. “…We’ve got to stay engaged. We’ve need to keep building on the work we did last legislative session and if we keep doing that, we’re going to be successful.” 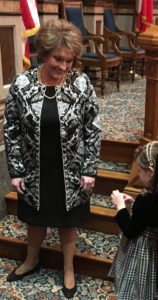 “To say that 2017 was a productive session I believe would be an understatement, but we’re going to build on last year’s success,” she said. “We have a bold, pro-growth agenda and we are ready for this session.”

“They are undeterred from any of the noise that you hear out there in the public,” Hagenow said. “And they ahve a fundamental commitment to what they believe is the right thing to do and, because they have that, we are going to be successful.”

Senate Republican Leader Bill Dix of Shell Rock repeated his promise that the GOP will pursue “chapter two” of its policy agenda.

“The one thing that we didn’t check off last year…and I know that we’re all going to find a way to get that done and that is to reduce our income tax rates this year and find a way for Iowans to keep more of their hard-earned money,” Dix said, to applause.

Iowa GOP chairman Jeff Kaufmann served as master of ceremonies for the fundraiser. Kaufmann said his party’s legislators are all about making “the state great again.”

“You go and you get under that dome and you go get ’em!” Kaufmann said in conclusion.

Kaufmann also took a page out of President Trump’s book and assigned nicknames to two of the leading Democratic candidates for governor.

Iowa Democrats also held fundraisers on the eve of the 2018 legislative session, but they were closed to reporters.