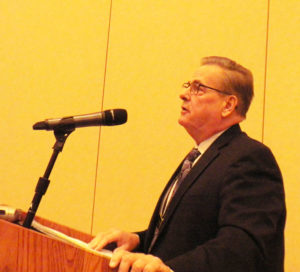 The Iowa Racing and Gaming Commission has approved more than eight million dollars in renovations for two projects at the Prairie Meadows Racetrack and Casino in Altoona.

Prairie Meadows CEO, Gary Palmer, says $6 million  of the renovations are for the convention center area adjacent to the casino. “It’s going to be all new carpet, lighting, wallpaper, it will have a whole new look to it when we are done with it,” Palmer says. “We opened this in 2006, so it’s time to remodel before it looks like it needs remodeled.”

He says the new lighting system will allow them to specialize the color of the rooms. “We have so many different people who want different things for conventions, weddings….this new lighting system we are putting in, if we are having a wedding or anniversary and yellow are their colors are say yellow — we can make that whole room yellow for you — it will accent because of our lighting,” Palmer says. He says they are doing the remodeling in stages.

Palmer says they are working on the board room and break out rooms and will work until June when they have a lot of bookings. He says they should be able to finish the rest of the renovations there by August. They also plan to spend $2.7 million to renovate the clubhouse on the fourth floor that is used for racing.

The Racing and Gaming Commission approved the project at their meeting last week at Prairie Meadows.