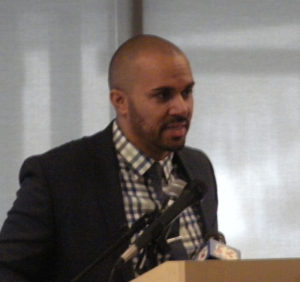 The executive director of the Urban Dreams organization in Des Moines was the keynote speaker. Izaah Knox talked about his experiences being the son of a white mother and a black father, and now as a father of children with a wife who is white. He says while Des Moines and the rest of the state have made gains in equality — there are still many issues where minorities face discrimination.

Knox lives in one of the poorest neighborhoods in Des Moines and says it is an example of what is called the “birth lottery.” “There’s been research out there showing that where you are born really matters on your ability to move out of poverty or to sustain high levels of success,” Knox says. He says part of the issue is that people are surrounded by those who make them feel comfortable, and he cited research that shows 75% of white people do not have a friend who is non-white. 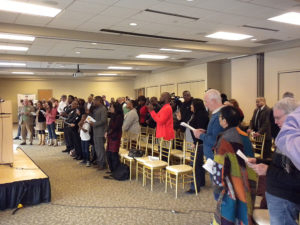 Participants in the MLK Jr. celebration.

“In a 100 friends scenario, the average white person has 91 white friends, one black friend, one Latino friend, one Asian friend, one mixed-race friend, and one friend of other races,” Knox says.

Knox says the mix is different for black people. “The average black person on the other hand has 83 black and white friends, two Latino friends, zero Asian friends, three mixed friends, and one friend of an unknown race,” Knox says.

He says the lack of knowledge about others is the reason that minorities are often discriminated against when it comes to employment. “Too many people only have one or two or three or four friends who are diverse. That’s the reason why we don’t hire diversely,”Knox says.

Knox says everyone can make society more diverse by expanding their circle beyond those who are like themselves. “It’s up to us reach out and to go places like my wife did….it’s up to use to make sure that we are going out, because that one black person — this is for the white people — that is your friend. They don’t speak for all black people,” according to Knox.

Knox says Urban Dreams and others are taking steps to help increase the diversity in Des Moines and the rest of the state. But he says there is a lot of work yet to do