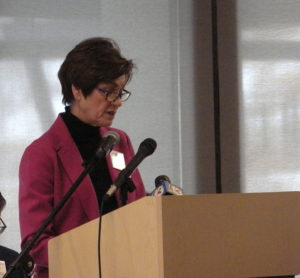 Governor Reynolds reads a proclamation at the MLK Jr. ceremony.

The governor says the day is a great way to honor the legacy of King, but it shouldn’t be the only day that is done.”We need to reflect his vision throughout every single day,” Reynolds.

The event’s keynote speaker focused on several issues where he says the state lags behind in diversity, including the fact that the state unemployment rate among blacks is 14.8% compared to the overall rate of 3.9%. Governor Reynolds says the state is working to address many of these issues.

“A lot of the things we are doing I think aligns with what the need is — whether it is future ready Iowa or we have the minority unemployment task force that has put together an initiative,” Reynolds says. “Because it is not acceptable where our unemployment rate is and in the minority community.”

Reynolds was also asked about the recent comments made by President Donald Trump about immigrants, and how that impacts efforts to improve diversity in the state.

“It’s not helpful, because…words matter, and we need to be thoughtful when we are commenting on things like that,” Reynolds says. “I wasn’t in the room, I don’t know what was said…but if that was said — it’s not acceptable. I am working really hard to bring people together to provide opportunities to help people to have a great career and a great life, and it helps our companies grow and to expand and it makes us a better state.”

Reynolds says she has talked with people who expressed concerns at the event and hopes to work with them. “We’re taking some steps in the right directions, but it is clear that we have a lot of work to do. And I think acknowledging that is where you start,” she says.