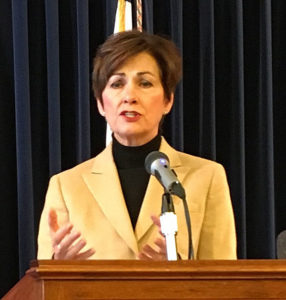 Governor Kim Reynolds today said she had her staff immediately check with Iowa Emergency Management officials after the false alarm about a nuclear attack that was sent this weekend in Hawaii.

“As soon as I saw that, because I can’t imagine the fear and the angst and the anxiety that they were feeling,” Reynolds told reporters during her weekly news conference.

Iowa officials have the technology to send out emergency cell phone alerts on a variety of topics, including a warning about missile attack, and Reynolds said she’s been assured there are adequate safeguards in place.

“We have a secure process in place,” Reynolds said. “We have multiple validation steps throughout the process so that the messages are accurate and they’re appropriate…Only the people that have been trained for the system have access to the system.”

It took officials 38 minutes to issue the false alarm message in Hawaii this weekend. If a mistaken alert were issued to cell phones throughout the State of Iowa, Reynolds said Iowa Emergency Management has the ability to quickly send a correction.