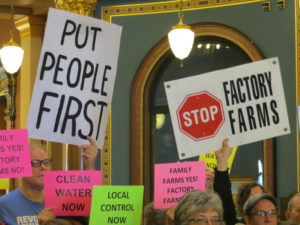 A coalition of more than two dozen state, local, and national organizations rallied at the statehouse today urging passage of a package of bills they say will strengthen regulation of large hog confinement operations known as CAFO’s.

The coalition says they have diminished the quality of life in the Iowa countryside. The Iowa Alliance for Responsible Agriculture is calling for a moratorium on new large hog operations until fewer than 100 Iowa waterways remain impaired.

It’s one of several bills offered by Senator David Johnson, an Independent from Ocheyedan , he says will strengthen the regulation of hog farms.  “It’s time to get tough on poor siting of hog confinements — including those being built in environmentally sensitive areas, and locating CAFO’s where the smell and sound of someone else’s money is in your bedroom every night,” Johnson says.

Johnson say more large hog operations are going up in areas of the state where the environment is sensitive. “In northwest Iowa CAFO’s are creeping into Dickinson County where the Iowa Great Lakes and other natural features draw more than a million visitors every year,” Johnson says. “Some people there wonder if CAFO’s and Iowa’s famous vacationland can co-exist.”

Under the bill, the moratorium would last until Iowa redesigns the so-called Master Matrix plan adopted in 2002 that helps to determine if a livestock operation can be built. Critics say the plan is not working to limit the locations of livestock operations.

The chair of the Senate Natural Resources and Environment Committee, Ken Rozenboom, a Republican from Oskaloosa, has assigned a bill for consideration — be says he has concerns. “I just don’t think that’s the right way to approach whatever problem they’re trying to address,” Rozenboom says, “we are trying to grow Iowa, not hurt Iowa.”

The Iowa Department of Natural Resources says there are roughly 13,000 CAFO’s in Iowa, and the number continues to grow.