You are here: Home / Sports / Big second half lifts Northern Iowa past Drake 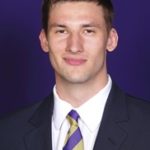 Northern Iowa dominated the second half in a 68-54 win over Drake in the McLeod Center. Senior Bennett Koch came off the bench to score 19 points as the Panthers outscored Drake 42-25 in the second half.

Panther coach Ben Jacobson removed Koch from the starting line prior to Saturday’s win over Valparaiso.

“It has always been about the team and what the help the team so I was behind his decision 100 percent”, said Koch. “In the Valpo game that is exactly what we needed.”

Drake led by 16 points in the opening half before the Panthers rallied to within three at the break. Reed Timmer led Drake with 19 points but the Bulldogs made only nine of 23 shots in the second half as they fall to 5-2 in the Missouri Valley race. UNI improves to 2-5.