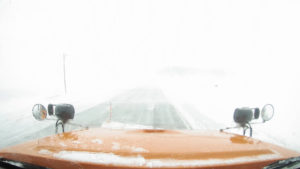 A snowplow camera view from Iowa Hwy 10 in Northwest Iowa.

Getting around on the western side of the state today is a challenge as the winter storm moved in brought large amounts of snow with it.

The Winter Operations Administrator for the Iowa Department of Transportation, Craig Bargfrede says drivers are facing winter conditions in that area. 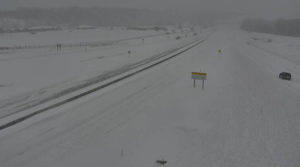 DPT traffic camera view of I-29 in Sioux City.

He says South Dakota has closed Interstate 29 roughly outside of Sioux City north. Bargfrede says they’ve issued an advisory for the Iowa area. “In that Sioux City area and just south along I-29 we have areas where we are saying travel is not advised due to the blowing and drifting,” Bargfrede says, “but we have not officially closed I-29 if you will.”

Things are much better as you head east, and he says they’ve caught one break from the weather.

“The fortunate thing is that most of the rest of the state of Iowa, the air and temperatures have remained high enough that we’re not seeing the icing occur that we had originally forecasted,” Bargfrede says. 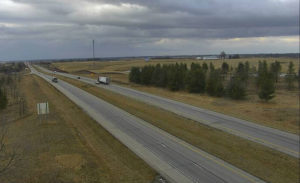 An I-80 traffic camera view near Grinell shows the contrast in conditions.

Bargfrede says drivers in areas where there is bad weather need to be patient.

He says you need to be careful operating around the plows and don’t crowd them or try to pass when the visibility is low. The Iowa State Patrol issued a tow ban for all of northwest Iowa.

Reports from Le Mars showed they had received seven inches of snow by 12:30, and the snow was till falling. The city of Le Mars pulled plows off the streets until the visibility improves.