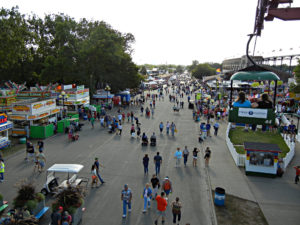 A security upgrade is in the works for the Iowa State Fairgrounds.

Fair spokesperson Mindy Williamson says a 20% boost to the fair’s security budget has been approved and the extra money will be directed toward personnel, training and equipment. Williamson calls it a precautionary move.

“I think this is just a different world we live in today and something that’s been needed at the fairgrounds, but there weren’t any specific events or anything that happened,” Williamson said. The increase in funding will allow the fair to hire sworn police officers, both full-time and part-time.

According to Williamson, the Iowa State Patrol, Des Moines Police and the Polk County Sheriff’s Department will continue to help with security during the Iowa State Fair.

“So, this is just another way to enhance that and be a little more proactive than reactive, given some of the world events that we have seen,” Williamson said. The new public safety force will oversee security for more than 350 events that happen on the fairgrounds each year, including the Iowa State Fair in August. Considering how many people attend the 11-day run of the fair, police have not had to deal with many serious issues.

“We’re thankful to have, you know, a million people who come visit the fairgrounds and less than two-percent of those people have something, an incident, where they’re working with our police officers on the grounds,” Williamson said. “So, great people come to the Iowa State Fair.” The 2018 Iowa State Fair is scheduled for August 9-19.