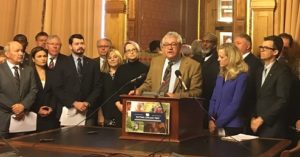 Democrats in the Iowa legislature gathered this morning to “reinforce” for voters the proposals in their “Putting Iowans First” agenda.

Republicans hold a majority of seats in both the Iowa Senate and House, giving the GOP control over the legislature’s agenda last year and again this year. Democrats like Senator Petersen say their alternative agenda includes things like sending more state money into schools and finding ways to expand broadband access to rural areas.

“I think Iowans want to know what Democrats stand for and want to see a positive agenda,” Petersen said. “If you look at the growth agenda Republicans are touting, the first bill out of the shoot in the Iowa Senate is a massive budget cut, programs and services that Iowans depend on.”

This afternoon, a Senate committee will review a GOP plan to cut 52 million dollars from the current year’s state budget. The cuts take into account lower-than-projected state tax revenue and leave a “cushion” of several million dollars if state tax receipts continue to fall below expectations between now and June 30.