You are here: Home / Crime / Courts / Sioux City 18-year-old charged in deaths of two other teens 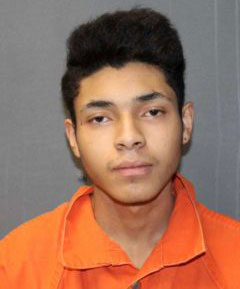 Two Sioux City teenagers were murdered early Sunday and a teen suspect is now in custody. Police Sergeant Ryan Bertrand says officers were called to the Morningside area of town around 1:20 A.M. on a report that two individuals had been stabbed.

“The two victims and the suspect were originally in a vehicle and had been riding around together and we believe the assault started inside the vehicle,” Bertrand says, “and after the vehicle came to a stop, it continued from there.” The suspect had fled the scene.

Officers found 18-year-old Felipe Negron Junior and a 17-year-old girl, who were taken to the hospital for treatment of numerous knife wounds. Bertrand says both were pronounced dead at Mercy Medical Center. He comments on a possible motive.

“There is a prior relationship between the victim and the suspect,” he says. “They are associates and are known to one another. The female victim was a prior girlfriend of the suspect.” The name of the girl hasn’t been released. Bertrand says Negron gave police information about the crime before his death. Authorities were dispatched to a grocery store around 2 A.M. after person showed up at the store with a stab wound.

Bertrand says that person turned out to be the suspect being sought for the stabbings, 18-year-old Tran Walker of Sioux City. “He had a wound on his hand that he was bleeding from and that was unusual and that was called in,” he says. “Officers responded quickly to the scene and officers made contact with him there and he was taken into custody without incident.” Walker was treated at the hospital for his knife wound and then interviewed by police. He is charged with two counts of first-degree murder.

Walker is being held in the Woodbury County Jail without bail. The two victims are the second and third people to die from violent crimes this month in Sioux City.