The owner of what’s called the world’s oldest continually-operated manufacturer of golf course accessories has completed a plan to transfer the ownership of the Cedar Falls business to its employees.

Standard Golf Company spokesman Matt Pauli says third-generation family owner Peter Voorhees doesn’t have any dependents and was looking for a succession plan. “He wanted to make sure that the legacy of the company stayed in Cedar Falls — we’ve been there over 100 years — and this was the best way that he found that he could help transfer the company and maintain the company’s longevity,” Pauli says.

Voorhees decided to create a stock ownership plan to transfer 100 percent of the company to its employees. “At the end of every year the profits of the company are divded up among the employees based on a formula.” Pauli explains. “So each employee gets a certain among based on longevity, based on a lot of factors. And it’s essentially kind of a retirement benefit… so it will determine how many shares you get each year and the company’s valued each year.” 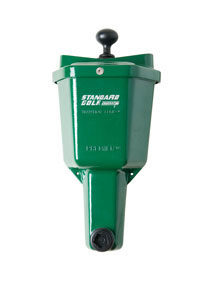 A ball washer made by Standard Golf.

Pauli says there are approximately 25 employees who will be part of the plan and will then be able to cash in their shares when they leave the company or retire. Pauli says Voorhees is 70 and there had been a lot of questions from employees and those in the industry about what would happen in the future.

“This puts an end to a lot of speculation in that regard. So the employees know, hey we’ve got a job, we are going to stay in Cedar Falls and our customers and so forth have the confidence that we are going to be around as well,” Pauli says. Standard Golf was founded in 1910 and Pauli says they make all types of equipment for golf courses expect for the clubs and golf balls.

“Essentially we’re tools that the golf course superintendent would use to help maintain the golf course. Tee markers, signage, flags, cups, sand trap rakes,” Pauli says. “But the most identifiable thing that we make is probably what people see on TV all the time — and that’s the flags that are on top of the pins at the major tournaments and throughout the world. We have distributors throughout the world and we have a warehouse in Amsterdam.”

Pauli says the transfer of the company ownership happened on January 3rd, and doesn’t change any of the leadership and simply sets up the plan to make the employees the owners.