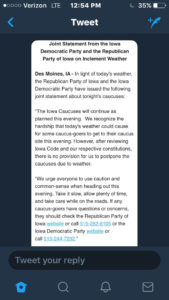 There is no delaying the Iowa Caucuses. The party meetings will start tonight.

The chairmen of Iowa’s two major political parties issued a joint statement, saying party rules and state law do not allow the Caucuses to be rescheduled or postponed due to weather. The Iowa GOP and Democratic Party leaders are urging people heading out tonight to “use common sense…take it slow and allow plenty to time” to travel to their caucus meeting site.

Participation in tonight’s Caucuses already was expected to be a fraction of what it has been in recent presidential election years. However, Democrats had expected a higher level of interest from newly-engaged activists and Republicans were hoping first-time GOP voters who supported Trump in 2016 would participate.